I have been to 5 weddings in my life, all of which have occurred in the last four years. One of these was before I discovered my interest in photography, one of them I was a bridesmaid for and two of them I photographed. Since becoming a photographer, I have only been to one wedding where I was not hired or part of the ceremony, and that wedding took place last week. 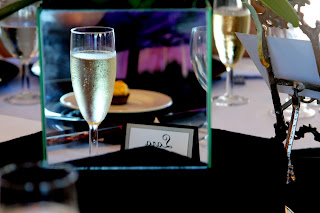 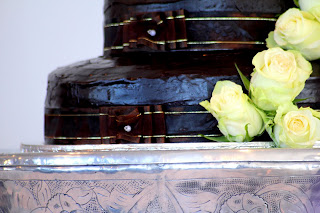 As a photographer, I hardly ever go anywhere without my camera with me. And when I travel halfway across the country to go to a wedding, you can bet that my camera is going to be by my side. It is an extension of who I am, after all, and it is what I do wherever I go. I know that sometimes it can get annoying, that sometimes I get in peoples faces, but I do try to be respectful as much as possible, and never intend to get in the way. But, when you are not the paid photographer for an event, you need to know that there are lines that you shouldn't overstep. So I thought that I would write a quite post about my experience of unofficially photographing a wedding. 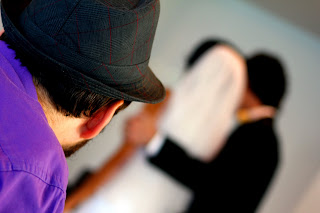 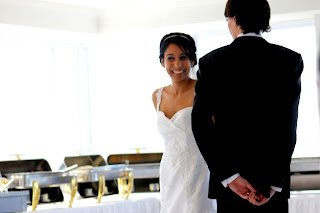 It is very tempting to jump into the role of photographer on occasions like these. You want to grab the shots that you are seeing pass you by. You want to jump into the middle of the aisle when you see the bride walking down it. Don't. Once again, someone is being paid to do that. It is someone's job. You are there as a guest, and it is not  your place to be interfering with the proceedings. It will only annoy the bridal party and the hired photographer. By all means, shoot what you see. But don't interfere, don't interrupt and, especially during the ceremony, just stay in your seat. I, myself, didn't actually bring my camera into the ceremony but brought it out during the reception. Of course, I missed some of the shots from the ceremony which is disappointing, but I am sure that the bride and groom are grateful that they couldn't hear me snapping away throughout their vows. 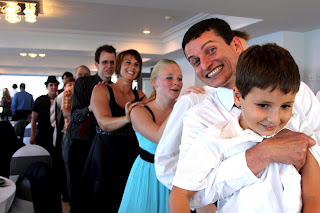 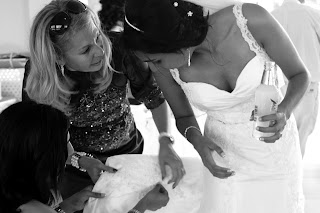 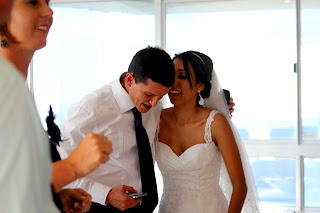 And so, I want to say thank you to Andrew and Nikita for inviting me to their amazing wedding. It was the best time that I have had in a long time, and definitely worth the trip. I hope that I stuck to my guidelines and didn't get in the way too much, and I hope that you two enjoy a most wonderful life together.
Posted by Unknown at 9:45 PM No comments:

I stand awkwardly at the back of the room, feeling very out of place amongst the talented individuals that surround me. In a sea of black and white ensembles, I stand out like a sore thumb. I raise my camera to my face as a barrier between me and them. Through the camera, it doesn't matter if I am out of place. It doesn't matter if I am being stared at or doing the staring. The camera acts as my buffer and it makes me feel more at ease. 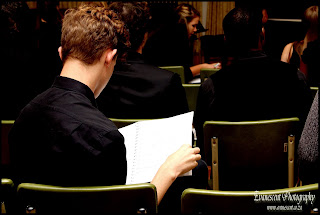 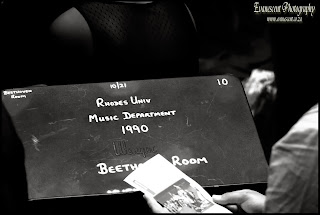 The practice begins and I weave through the crowd, wincing as the click of my camera pierces the beautiful voices that are echoing around me. I try to time the shots to coincide with their synchronised breathing so that it will be less distracting, but even then the sound rings in my ears and I am embarrassed by it. I am not supposed to be drawing attention to myself, but am supposed to be silently capturing them in these moments. I do not want the posed shots, don't want them to be turning to me and smiling. I want to capture their passion, their warbling, their excitement. That is what I want to see in my photographs rather than seeing a made up face posing for me.

It's not just me. Everyone is a  little on edge at the moment. Each misplaced note is chastised, each mistake reprimanded. There is no time for error now. Practice ends and we file down the passageways towards St Peter's Cathedral. As guests make their way inside, receiving a glass of sherry at the entrance, the choir stands back on the grass while the details for the concert are finalised. The last few guests peter in and take their seats, and the choir start making their way one by one towards the front of the room. They stand before everyone, the nerves written on their faces, their bodies taut. The conductor walks to the piano at the side of the room and plays a single note before taking his position in front of them. He raises his hands and the music begins. 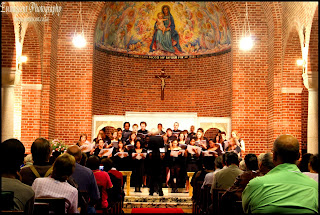 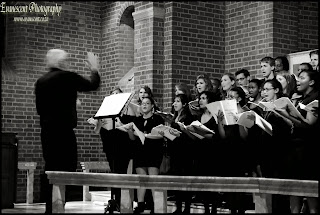 As they sing, you can see the stress floating away from their bodies. It takes longer in some than it does in others, but you can see it nonetheless. They are standing more comfortably than they were at the start. They are singing more confidently. They are starting to enjoy themselves, remembering why it is that they chose to participate in the concert, in the choir, in the first place. Nothing that they had been worried about before matters anymore. The audience fades away and they are no longer singing for anyone but themselves. So what if one note is out of place? It is one note in a myriad of notes, one voice in a symphony of voices. And though the symphony can hide the mistake of one voice, it is that one voice that also pushes the symphony forward, adds to it. The symphony would be nothing if not for the combination of singular voices coming together as one. 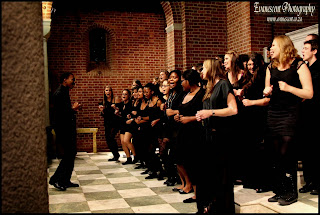 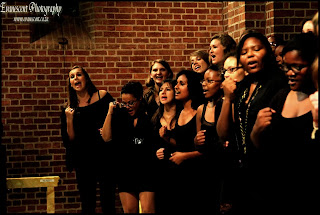 I stand on the sidelines and snap photos left, right and centre. But I am not making these photos. I am merely capturing the life that is unfolding before me.
Posted by Unknown at 10:37 AM 1 comment:

I came across the most awesome effect in Photoshop about two weeks ago, and I have been going crazy with it ever since. Making polaramas! 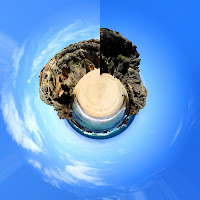 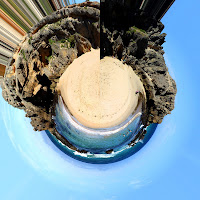 Polaramas are images that have been distorted to turn them into little worlds, as in the images above. These two  polaramas were created from the same image, one just slightly more cropped. You can see the huge difference that it makes to the image itself.


Polaramas are images that have been distorted using Photoshop's Polar Coordinates distortion which turns them in on themselves to create a little world out of  your photo. They are really fun to look at and really simple to make.

So what do you need to make a polarama?

Open up your Photoshop and either load your image or (if you are using a panoramic image that has yet to be pieced together) put it together. Note: If you are planning on using a panorama, you will often find that the bigger the image, the longer the polarama takes to generate and the more of your CPU space it uses - don't be scared to save the panorama somewhere and then resize it for the polarama. 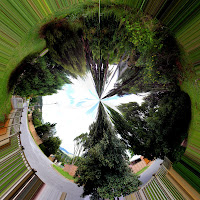 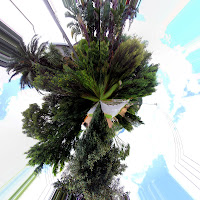 These two polaramas were made using the same panorama of my front garden. On the right is the regular polarama, on the left is the inverted one.

Once you have your picture in Photoshop, the next step is to change the dimensions. I use Photoshop CS5, so please bear with me... I only know how to use this and do not know the steps to change the image size in other versions or other programmes, but it really can't be too difficult! Select Image from the top menu and click on Image Size. You will want the height to be adjusted to the same size as the width. So copy the width and paste it into the height area. You will see that you have a big, distorted square. 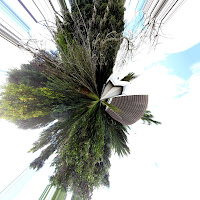 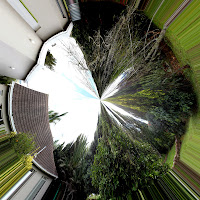 Now, here you have a choice. You can either have a regular polarama with the sky on the outskirts of the image, or you can have an inverted polarama where everything else is on the outside and you are looking into the sky. I love them both to be honest and can't decide which method I prefer. You will have to decide that for yourself. If you want a regular polarama, be sure  to rotate your image 180 degrees so that it is upside down. If you want an inverted one, you can leave it as is. See the above for examples of each. 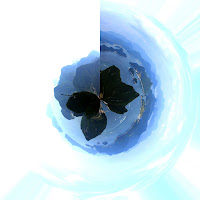 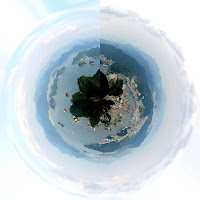 Some polaramas from tongyeong island in South Korea. Note the different colours and aspects of the photos joining in the middle where the two sides  of the image meet. Taking a 360 degree panorama will fix that, as in the cases of the panoramas taken in my garden above.

Now your image is ready. Select Filter from the top menu, mouse over Distort and select Polar Coordinates. It may take awhile to load, particularly if the photo in question is a large one. I know that I had trouble with large images that couldn't handle the distortion and it kept coming up saying that I didn't have enough RAM to complete the job. If that  happens to you, just shrink the image and you should be fine. Make sure that Rectangular to Polar is selected and then click OK. And voila! You have  yourself a polarama. 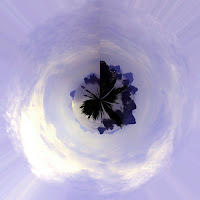 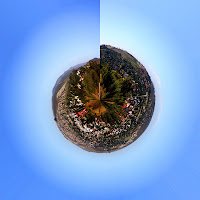 A panorama of Tongyeong and one of Grahamstown.