A Part of Their Story 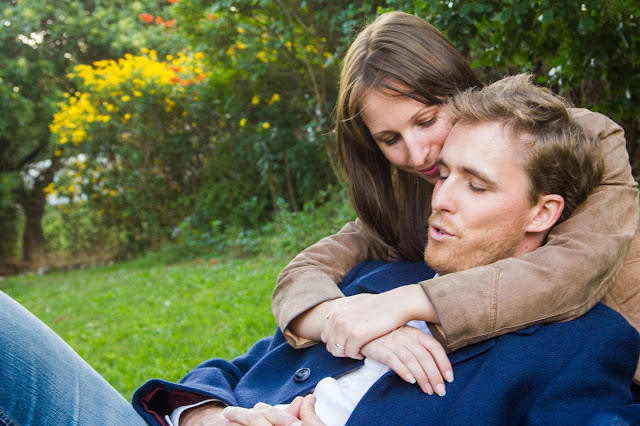 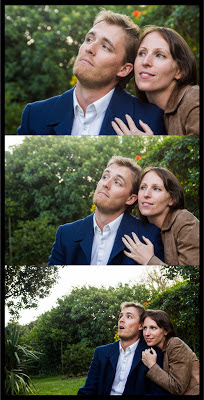 Grant moves his chair away from the desk as he answers the call - never the world's best multi-tasker - and begins to pace around the house. Into a room one minute, out the next, up and down the hall - his typical phone call routine, but this is no typical phone call.
"You want me to do what?"
I motion with my arms trying to catch his attention and involve him in a game of charades so that I can figure out what's going on.
"Yes, she is."
He catches my eye, but refuses to participate any further than that.
"Yes, she does."
I narrow my eyes now, wondering what exactly it is that I "do".
"Okay, bud. Meet you there."
He hangs up the phone and sidles back in front of his computer, ignoring the glares that I am sending in his direction.
"What's going on?" I finally shout, giving in to my frustration and curiosity.
"Oh," he says as though he's just realised that I'm there. "We're meeting Mike and Vicky at Home Affairs in half an hour."
He turns back to the PC.
"Uh... why?"
"Just as witnesses."
"To..."
"Their marriage."


Fast forward three years, and there I am, my camera in hand, snapping shots of Mike and Vicky. They're fresh from their honeymoon and standing before friends and family in full wedding attire saying, "I do." It's an anniversary party, really - a reason to celebrate three years of happy marriage with those that they love most. And once again, I am a part of their happy moment. I'll also be the one to remind them of their anniversary a year down the line. 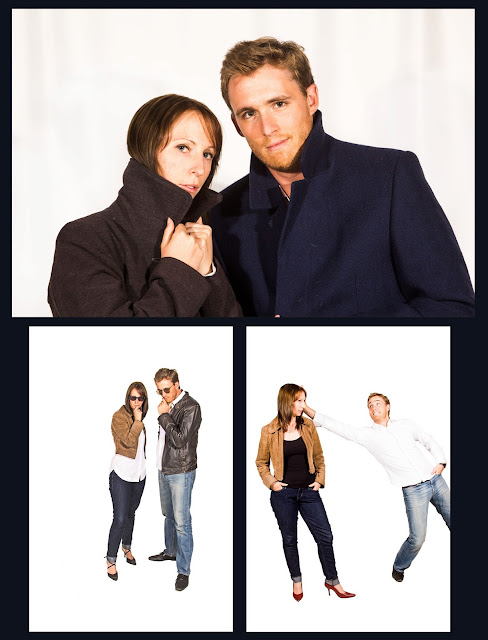 A year and a half later, and Mike and Vicky stand in my studio under the harsh, bright lights. I like to think of the pictures that I take as family photographs - a monument to the life that the two have built for themselves around each other, and a testament to the love that they share. They laugh and make fun of each other, they tease and taunt and compliment. They try to stay serious, but they just can't do it for more than a few seconds at a time - can never take themselves too seriously. It's just not who they are. Five years in and Mike and Vicky are just as in love as the day they got married. It's not something that can be said for every couple, not even for most. But I look at them, and I think to myself that I can see them being just as happy in five, ten or twenty years to come. 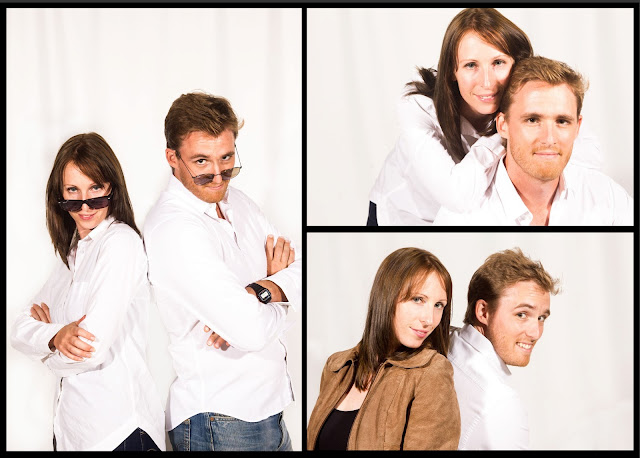 Thank you, Mike and Vicky, for allowing me to be a small part of your story. 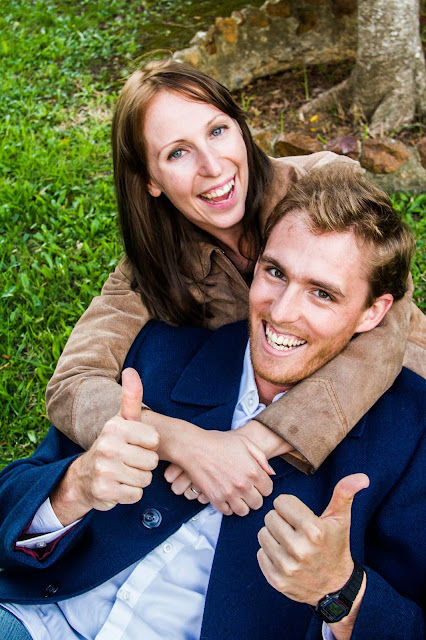 Two years ago, I took a gig that I was completely unprepared for. I knew absolutely zero about wedding photography, but when two of my friends asked me to take their wedding photographs, I accepted the challenge.

You can read more about the challenges that I faced during the event itself in my blog from the day, and you can read more about the couple in the post that I intend to write later this week, but this is not what this post is about. This post is about how I have changed in the last two years as a photographer - how my process has changed and, more importantly, how my outlook has changed.

About two months back, I decided that I needed to include more of the wedding photography from this first shoot on my website, and I started going through my photographs to try and find some more of the shots to add. And, I am not sure how it happened, but all of the edited photographs were gone with the exception of the few that I had already put up of the wedding. The originals (all 700 odd of them) still lay in a folder on my laptop, taunting me. And, after a long while, I decided that it was time to re-edit the photographs. Without any guidance in terms of how I had originally edited them, I was left to my own devices and, looking back on it now, I think that was the right way to go about the re-editing process. I didn't bother comparing the original edits with the final cuts until everything was done, and I ended up with a complete set of photographs rather than one that feels disjointed. In my mind anyway.

Some of the photographs ended up looking fairly similar with just small changes, but some looked entirely different. So I thought that I would put together some comparisons and see what other people think.

From left to right, this picture shows the original image, the first edit and the second edit. I have focussed on the bride's face throughout, though the second edit does show the full photograph.

Once again, I found that the biggest difference was with the skin tone that came out in a far more flattering manner in my second edit. The white balance was also more appropriate and the whole image felt more natural and less edited than my initial edit. 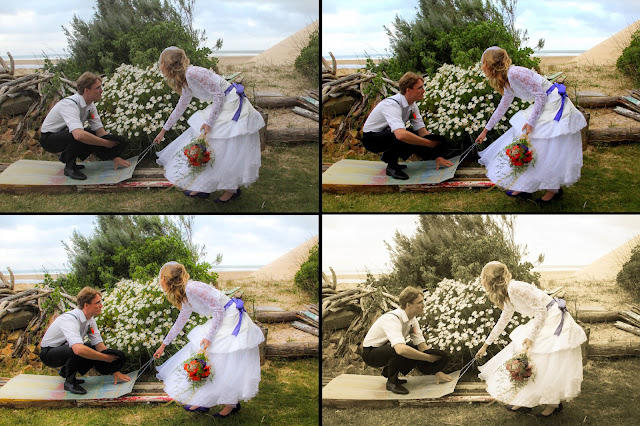 The picture above shows (going clockwise from the top left) the original photograph, the first edit, an edit with a Lightroom Aged Photo preset and the second edit without any presets. I added the Aged Photo preset to a number of the shots to form a separate collection as I felt that it worked well with the style of the wedding,

I felt that the most noticable changes in the second edit were with the colour of the dress and the skin tones which I felt ended up being more flattering. 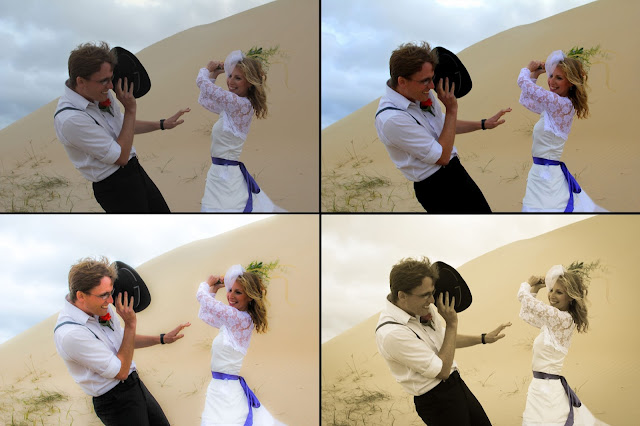 This comparison has the same structure as above (original, initial edit, Aged Photo, second edit), and while I feel that the colour in the second edit is better in terms of the dress and the skin tones, it did lead to the sky being washed out more than I would have been happy with. 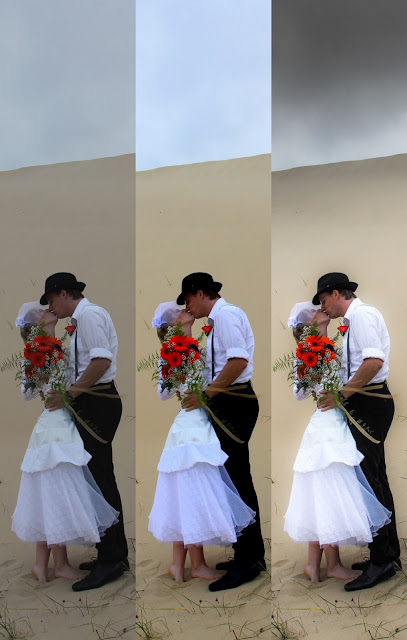 As with the first picture, this one shows a portion from the original, the first edit and the second edit. In this edit, the dress and the sky show the most significant change. For the second edit I chose to use a graduated filter which I felt brought out the storminess of the clouds providing a nice contrast to the image. But, at the same time, I'm not sure if it worked in the way that I had hoped. 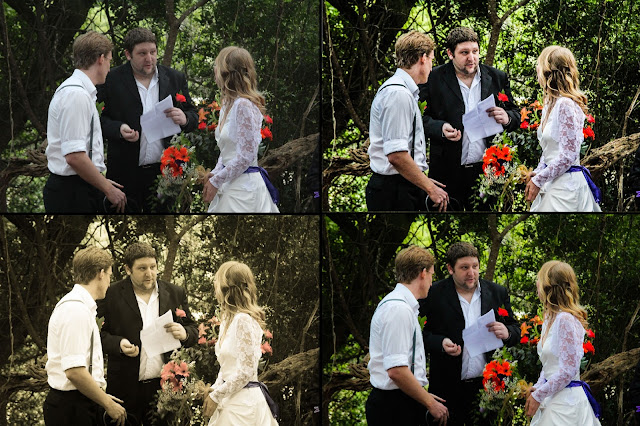 Finally, we come to the images from the ceremony. I had the biggest pain with the ceremony because it was outdoors on a shady day under the cover of trees with no way to get the proper flash lighting that I would have hoped for. So, when it came to editing the ceremony photographs, I was underwhelmed with what came out of it and ended up providing the couple with few photos of the ceremony itself. With the second edit, I adjusted the clarity which I felt worked better for the situation, as did the Aged Photo look (in my mind anyway). So the above picture is a comparison of (from top left going clockwise) the original, the first edit, the second edit and the Aged Photo preset.

So these are just a couple of comparisons that I put together. All in all, though 738 photographs were taken on the day of the event itself, I ended up with 956 photographs including the preset edits, which I thought was a nice haul.

What do you think of the edits? Would you have done anything differently? 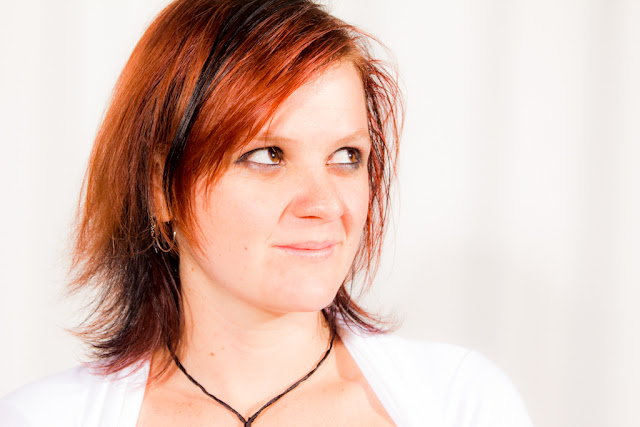 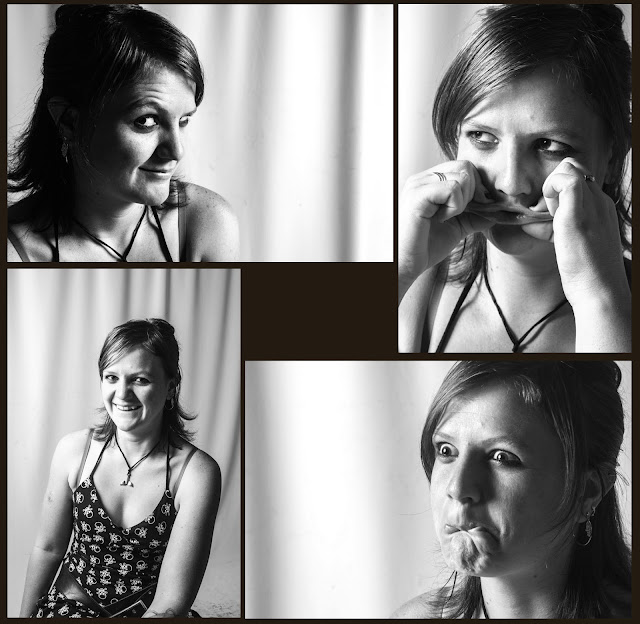 By far the best photography sessions that I have done have always been those were the subjects are having fun. And by a long way, the person who's had the most fun in front of my camera (with Mike & Vicky coming a close joint second) has been Dee. 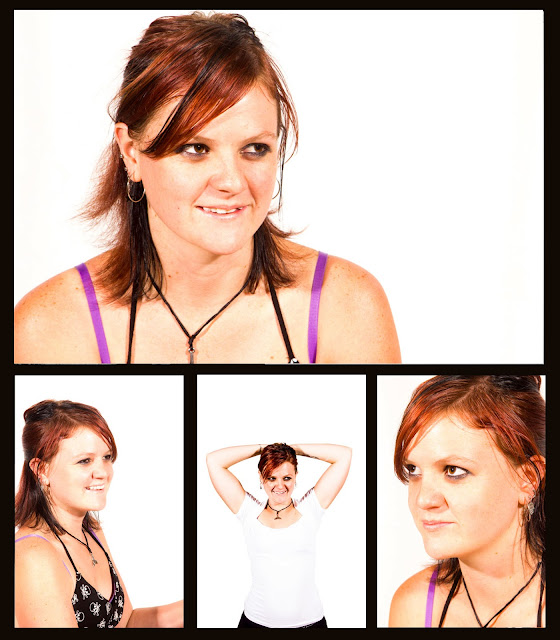 Someone who is far from shy, Dee lit up underneath the lights in more ways than one. From the first click of the shutter, it was fun and giggling, funny faces and rock star poses. I was head banging and Gangnam-Styling and non-stop smiling from start to finish. Even the attempts at serious poses were short-lived, and the photos came out all the better for it. Looking at them brings a smile to my face, and hopefully to those of others. 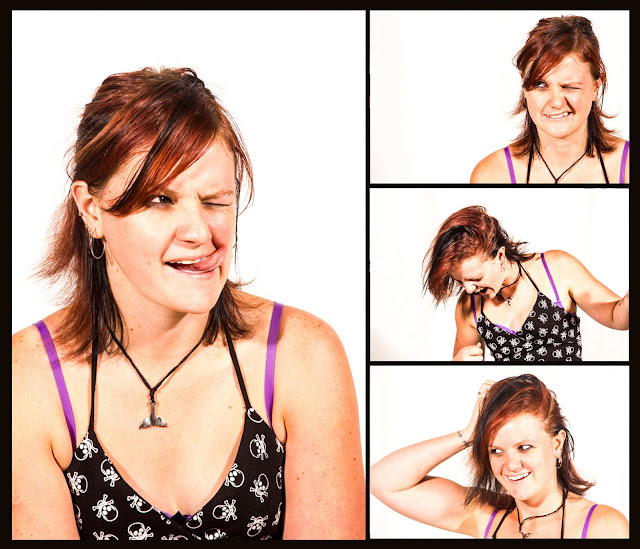 And the studio session was just the beginning. It was quickly followed by drinking games galore as the fun and laughter spilled over into the rest of the house, truly making it an evening to remember (or forget, depending on one's alcohol tolerance.) 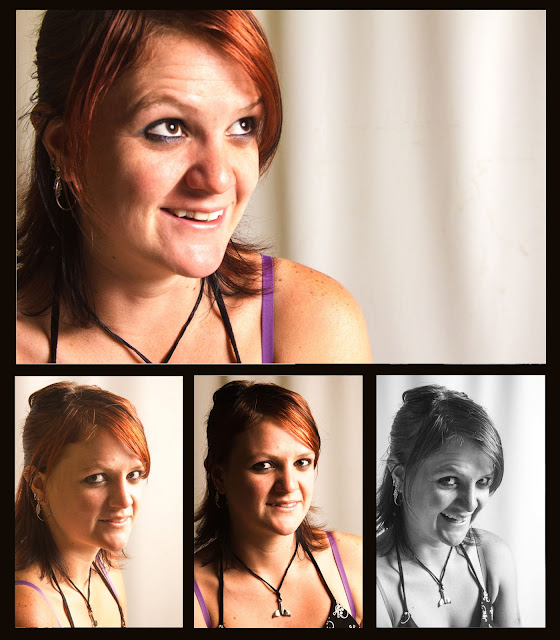 So I want to say a giant THANK YOU to Dee this time around for helping me have a most memorable photo shoot and a fantastic Saturday night. 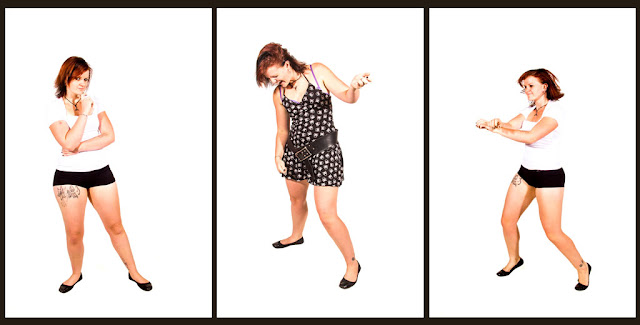 Posted by Unknown at 6:41 PM No comments: