So, as many of you may know by now, I spent last week Friday doing the photography for the wedding of two friends. It was the first wedding shoot that I'd done, and there were bound to be mistakes. In fact, there was one very big one, but I will get back to that later. Let me tell you first how I prepared for the day.


First things first, I wrote down a list of shots that I wanted to take. I knew the bride and groom already and knew some things that they might want to do and some things that they might not want to. They were not available at the time to ask, so I wrote up my own list and prepared myself to ask them for specifics when they came back from their honeymoon (which they took before the wedding).


Once I had the preliminary list, I started searching through the photography blogs that I follow for more ideas and advice. I added more photographs to the list that was steadily getting  longer and longer, and decided to visit the venue for the wedding a week early to get a feel for the place.

Seeing the venue was a great plan, since I found out that I would need equipment that I didn't have and wasn't familiar with using, namely a flash. Luckily, I managed to find one, and that part of the day was saved. I quickly learned to use it and learned to love it, and you can expect a post on that at some point within the next few weeks.


On the day itself, before leaving the house, I made a checklist of all the photography gear that I was going to need - lenses, tripod, flash, batteries, charger, bag, etc. and made sure that they were the first things packed into the car since I didn't want to forget anything. We then made the half hour trip to Port Alfred and relaxed for an hour or two in our accommodation before meeting the bride and groom and getting the day started.

So that was the prep that I did. And at the time, it felt like the right kind of prep to be doing. I arrived in Port Alfred feeling nervous, but pretty much ready for anything. I had met with the bride and groom and had removed some of the photographs from my list simply due to lack of numbers, since there was only one bridesmaid and one groomsman, which took away a lot of the photographs that I had planned for the bridal party. I had printed out the list of photographs that I had in mind and kept it in the camera bag that I was going to be using. So where did I go wrong then?

First of all, I would recommend insisting that the bride and groom make their own list of photographs in addition to your own. They will want to have specific photos taken, as will their families, and if you do not know what those are, you will be thrown off guard when they ask for them. In this case particularly, the bride and groom told me that they had no specific requests and that they just wanted "everything". That is great and all, but your everything may not be their idea of everything and can lead to slight chaos. 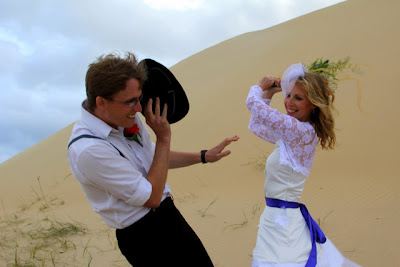 Next, I had everything planned down to a tee, and that is never a good idea. What happens then is that when someone comes along suggesting something different, you get thrown off. I had tons of ideas for great shots, but I suddenly found myself forgetting all of them when the bridesmaid refused to pose with the bride's brother (family drama) and when the groom's family (aside from his parents) got stranded in Cape Town and were not able to make it. It is great to be prepared, but try to leave some room for error. Do not freak out when things don't go exactly as planned.


Make sure that you have your tripod everywhere, and that you know it inside out. I had hardly used my tripod before the wedding, and while I used it for the family shots, which was great, I found that the dial used for turning the camera on its side was stuck, and not wanting to fiddle around with it, I elected to leave it instead and only took landscape oriented pictures of the family, which I later regretted. I also regretted not having the camera with me at the ceremony, as the area was dark and there was nothing to bounce the flash off of, which meant that I needed to use low shutter speeds with wide apertures and try to hold the camera as still as possible. I managed to get some good shots by leaning on a tree, and I am still not sure that I would have found a place for my tripod due to the angle that the venue was placed at (I'm not sure I would have found somewhere steady enough), but I know that I would have appreciated it.


Don't loiter. I very nearly missed the bride and groom leaving on their quick boat trip to the reception simply because I stood around chatting when I should have been off and away as soon as they had left. I missed them climbing into the boat, but thankfully managed to catch them before they rowed off and managed to get a good number of shots in.


And now for the big one. The biggest mistake that I made that night was not being sure how many photographs my camera's battery could handle. It turns out, that number is around 715. I didn't know this and wasted a lot of shots on the bride getting ready (another mistake, unless you have a spare battery lying around and a lot of time to do processing of the photos later) which I could have saved for things like the cake being cut and the couple's first dance. I had also left my charger in my bag in the accommodation (yet another mistake) which meant that I really was just completely out of luck. I missed a  large part of the ceremony, but thankfully got the necessary photographs of the family and the friends, the speeches and some of the food, the romantic pics, the ceremony and the preparation, which meant that the bride and groom were not too upset, but that didn't stop me from being furious with myself and vowing that the next item I buy will be a second battery.


So, what did I do right? Preparing, making lists of photographs, making checklists of items to bring (and bringing them), getting to know any new equipment that I may have needed to use, checking out the venue before hand, checking with the bride and groom what the bridal party was going to be like and being there nice and early to get all of the necessary shots.


What did I do wrong? I over-prepared, didn't know my own equipment well enough, let last minute changes stress me, loitered (a little), didn't insist on the bride and groom's input on my photography list and didn't bring a second Canon battery or my charger along.


At least now I know for the next time, and will learn from my mistakes. The next wedding that I do will hopefully go more according to plan, and less according to plan at the same time, since next time I hopefully won't plan as much and will be calmer now that I have some experience in my belt. No more stressing and more relaxing and having fun! Is there any advice that you would add?
Posted by Unknown at 4:39 PM