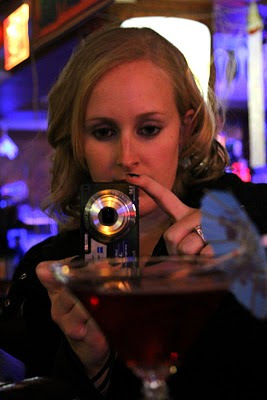 Friday night was the giant Halloween party at Buzz, and I went out for dinner with Geri, Neil and his co-worker before hand. We decided to go for dinner at Hungry Eyes which meant getting to Buzz pretty early when dinner was over. While we were waiting for other people to arrive, Geri and I started on a minor photo rampage and Friday night's picture is of Geri photographing my awesome drink of awesomeness.