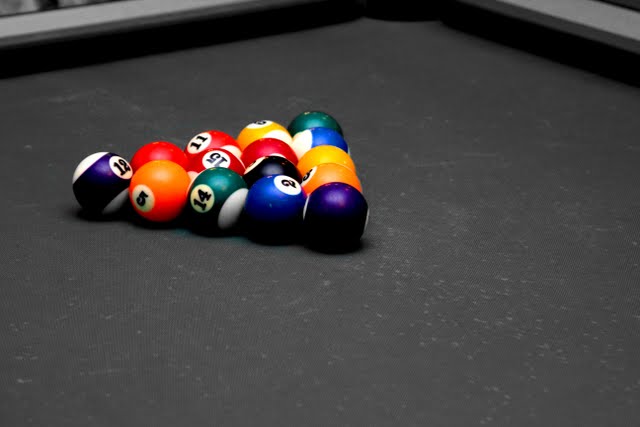 72 hours and 2 minutes. That was the time to beat. A full three days of non-stop pool playing to win a world record. Personally, I think it is nuts. I like my sleep, rather a lot in fact, and am not much of a pool player. But for those who are avid players and are willing to try, it is a daunting task. Three days of no sleep, no rest, no leniency. And now it is even longer.

It started on a Thursday morning, though the idea behind it likely started long before then. The idea itself probably started when the topic of the annual 24 hour pool challenge was brought up. Shaun and Kevin had both done the 24 hour a couple of times before. It was no longer challenging to them. They needed something better, something that would draw more attention to the club. What was the record? 72 hours? Pfft. They could totally beat that! And so they advertised and they prepared and they hired a photographer (who happened to be practically family) to cover the event. Sadly, the photographer was not prepared to stay up for the 72 hours with them. Not that it would have helped - being practically family meant that she couldn't witness for them anyway. But she was there at the beginning. Or at least, she was there at what was supposed to be the beginning.

I had half an hour - no more, no less. It was, after all, the busiest day of the month for the company, the day when all of the invoices are sent out and we are inundated with calls from clients who believe that they have been overcharged, undercharged or should not have been charged at all. Suddenly cancellations for services pour into the offices and, as the Accounts Manager, I kinda have to be there. But I had also been hired as the photographer, had promised that I would be there. I couldn't exactly let them down. And so, there I was, running out of the office at 8:40 in the morning to get some shots of the duo starting out on their journey to fame and (perhaps) fortune. But alas, 9am came and went and the record attempt hadn't even started.
"No worries," Shaun announced. "We'll start at 9:30."
He announced it in a carefree tone. It was up to them when they started, after all.
"What's half an hour compared to 72?" Kevin asked jokingly, not for the first time. And he was right. In the space of 72 hours, half an hour can either flash by or drag on endlessly depending on how long you have been awake.
Unfortunately, to me, half an hour was all I had, and I made my way back to work, disappointed with how things had started. I had grabbed a couple of photos nonetheless, the pre-record photos, the ones that showed four of them (two teams who were going to make the attempt) happy and smiling, bright-eyed and bushy-tailed and ready to face the world. They were even practicing their shots. Hell, it might be 72 hours of playing, but that was no reason not to try!

I returned after 5 that evening, once work had calmed down a bit, and found the club house fuller than I had left it. There were people stopping in to support those participating and there was a bar running to supply them with fluids. Red Bull had sponsored the event and brought through two cases of the stuff, one sugared one and one sugar-free. Grant stopped by as well, wanting to support his brother as far as he could, and we brought along our takeaway dinner of sushi. Which, compared to their dinner of sponsored Scooters pizza, was helluva healthy. Shaun and Kevin were still in high spirits, almost 250 games in and trying hard to best each other with their shots. The other two were looking a little rough, but considering that they'd been playing non-stop, it was hardly surprising. I stuck around for dinner and a little after and then made my way home. It had been a long day and it was definitely time to rest up.

After work on Friday, I stopped by again only to find out that two of the guys had dropped out and it was just Shaun and Kevin left to break the record. Which was good in some ways - only one team could make it into the record book, and it meant that if Shaun and Kevin finished, they were going to be in it for sure. But it  also seemed pretty demotivating to me, as a spectator. No matter, the guys didn't take it to heart and were still going strong 36 hours in. Chairs were placed beside the table and they would sit down in between shots to save their strength or stand and stretch their legs by taking a brief walk outside in the minute or so that they had while the other was playing. They were tired, there was no doubt. But they were still going strong, still chatting and laughing and joking around, and it was certainly encouraging to see.

Saturday saw Grant and I up bright and early and stopping by to see how the boys were doing. Still going, but slightly less strong than before. With only 24 hours to go, some of the strength that had left them in the early hours of the morning was returning and they were still even being a little competitive, trying to win the games. People came and went regularly, but there was always someone milling about, playing a game of pool, having a drink or just spectating. The boys were starting to slip up a little, forgetting whether they were stripes or solids or forgetting whether they had the ball in hand, but they were still going strong and there was no more doubt as to whether they would make it.

And so, Sunday morning arrived. I set my alarm for 9am and was up and about, ready to go half an hour later. We made our way to the Purple Horse and found the boys there, still going, but only just. There was no more sitting down, not after Shaun had dozed off in between shots. The slip ups that had started the day before were only getting worse. Instead of hitting the white ball at the stripes or solids, they would sometimes get confused and hit the solids and stripes at the white ball. With every shot, they needed to be reminded of which ball they were aiming for, had to be reminded how many shots they had, how many they had taken and whether they could move the white. It was no surprise. It had been 72 hours. Most people struggle to stay awake that long, never mind staying awake and playing a game of pool! But, nonetheless, they had done it. At 10:02, they passed the record and celebrated with a quick hug in between shots. Breaking it was one thing, setting the new record another. A day before there had been talk of playing to sunset, perhaps even after dark. Now, they were considering giving up after a couple of hours. In the end, they pushed the mark by an extra hour and 34 minutes, and that was enough for them. Kevin could hardly stand, Shaun was almost as bad. And yet, it wasn't over! There was still the interview to do for the camera, the packing up and, finally, the trip to the sanatorium to make sure that their three days of non-sleep, Red Bull and Scooters hadn't affected them too badly. Kevin, after all, was seeing things and that was never a good sign.

After a quick check up, the boys were cleared and the record was set in stone. They had done it! 73 hours, 34 minutes of solid pool playing to be put into the record books. That's all it takes. Who's up for the challenge?
Posted by Unknown at 8:42 PM