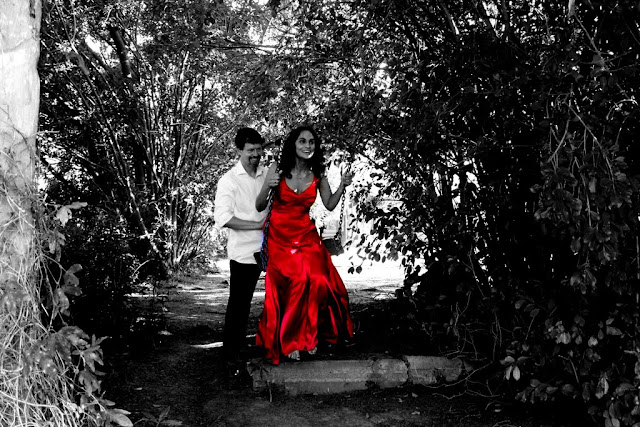 I woke up on Saturday with a sense of anticipation. Also a sense of panicky nausea, but mostly anticipation. You see, it had come time for me to attend my second wedding as a photographer. For those of you who do not remember, the first was a minor disaster with my camera dying halfway through the reception and me feeling completely terrible about it for weeks thereafter. And yet, I had been given another chance. And this time, I was being paid for it. There could be no mistakes now!

It was the perfect day for a day wedding - blue skies graced us without a hint of cloud and the sun was shining brightly. The middle of the day is, of course, not ideal for photography, but I was prepared to make it work. I had visited the venue a week earlier to scope it out and find some ideal spots for pictures - the trees that provided a perfect frame for family photos, the hidden swing, the pool around back and the bougainvilleas all providing possibly perfect backdrops while the animals provided interest. I had also, once again, discovered that I would need to bring a flash for the indoor shots and managed to find one with time to spare. Everything was set.

As we arrived at the wedding venue, in convoy behind the bride and groom, the nerves started showing again. I hurried everyone out of my car and rushed to the back to grab my camera and equipment so that I could get the couple arriving, but I was late and found that a lot of the guests had cameras of their own, cameras that seemed to be of the same quality as my own and cameras that made me very nervous. Was I really the hired photographer? Was it a courtesy that the couple had shown me while hiring a real photographer on the side to actually take the wedding photos. But I tried not to let it get to me. Even if I was only a courtesy photographer, I was damn well going to take the best shots that I could! And soon the crowds started dispersing, the cameras with them, and I found myself feeling more confident and I looked down at my viewfinder to review the shots that were being taken and found that they were coming out just the way that I wanted them to.

Before long, it was time for the ceremony and my scope out came in handy once again. I immediately made my way to the back of the room, away from the bride and groom, up a rickety staircase and onto a small balcony that overlooked the room. It was a risky move, deciding not to take the photos of the bride and groom up close, but it also meant that I was able to get shots of the whole room, was able to get further back than I would have managed otherwise, and with my telephoto lens I was still able to get great shots of the bride and groom swapping rings and saying their vows. It was a risk that paid off in some ways, allowing me to get photographs that I was really happy with, but it was also one that failed in others, the lighting of the room leading to grainier photos than I would have liked.

Once the ceremony was over, it was time for the family and guest shots. Like the first wedding that I photographed, the couple seemed to feel that the wedding was less about themselves and more about celebrating with their friends. This meant that they insisted on having photographs with all of the guests in attendance, an idea that I was particularly fond of. Even though the photographs were taken in the same position and area, every single one has a personal feel that shows the relationship between the couple and the guests. I found that these were some of my favourite photos taken on the day and few of them ended up being "rejected".

The official photos having been taken, it was time for the meal, and a big one at that. The first course arrived and it was assumed that this was the meal that was being provided. Everyone dug in happily to various salads, chicken, honeycomb and more, only to find out that these were only the starters and there was more on the way. With stomachs aching, it was time for a second course of mousakka, lentils, butternut, pumpkin, lamb and stew. Finally, the formalities ended with the cutting of the two different cakes and dessert being served.

With everyone filled to the brim, it was time for the relaxation to commence, and people made their way outside, where it was slightly cooler in the mid-afternoon sun than it was in the stone-walled building. The animals started to make an appearance, which everyone enjoyed, and everyone found spots to relax and take in the wonderful afternoon, whether it was under the shade of the trees or in the green house around the back. The bride and groom made their way around from group to group, chatting and just generally having a good time until I snuck them away for the last few couple photographs.

The swing, it turned out, was a perfect idea, showing off the couple having fun and not requiring too much posing. It was also perfect in that it was out of the harsh sunlight and hidden in amongst the trees, letting in perfectly dappled light. The pool was also a great place for the couple to cool off and just enjoy a few moments of peace and serenity before going back to the crowds and saying a final farewell as they left for their honeymoon.

When going through the photos later that evening, I found that I was really proud of each and every one of them, even the ones that didn't end up being edited due to small mistakes, errors and movement. It was the first time that I looked at over 700 photos and didn't feel like it was going to be a nightmare to go through the editing phase. The editing phase ended up being far more enjoyable than usual simply because the photographs came out so well and I was so pleased with them.

The photos above are just some of the ones taken on the day. If you would like to see more, please visit my website or click here.
Posted by Unknown at 9:45 PM