There is an advert that comes onto South African radio (or at least Algoa FM) fairly often. It is an advert for Kodak, and it is one that strikes a chord every time I hear it. It is an elderly woman talking about her wedding day, the day her daughter was born and (today) the day her granddaughter is born. And she says in this wistful voice that when they come out of the delivery room, she will be there with her camera. Which is all wonderful and beautiful. Only the ad ends off saying "It's only a photo when it's printed". It is such a beautiful advert, but that line gets me every time. It strikes a chord, of course, because I don't print many of my photos. I have collections of them stashed on  my computer. I want to print a portfolio, but that takes time and money that I just do not have.

And it brings up the topic of what exactly constitutes a photograph. It sounds easy, but everyone has a different say. Some people would say that only a printed picture is a photograph and that, until it is printed, it is still nothing but an image. Which is true to some extent, but I think that having it printed does not suddenly make it photography worthy. Some would say that once it has been captured it is a photograph and anything done to the picture thereafter is changing it so that it no longer constitutes a photograph but art instead. But isn't photography an art in any case? Where does the line get drawn between creating art with your camera and creating art through post-processing. Some people would say that HDR photography stops being a photograph and becomes something else, a compilation of photographs, a merging of artworks. I was watching a most interesting video about how an image of Imogen Heap was created using the merging of various photographs and the layering of them, one over another, until the original picture was almost unrecognisable.

So where do I sit on the topic? I think that a photograph is a fluid concept. I believe strongly in post-processing, since I like to make my images pop, stand out. While I could spend forever trying to get details in camera perfect, I would far rather touch up minor imperfections later than waste time trying to get it perfect on the spot and missing an opportunity to capture a moment. I think that some people can take the post-processing a bit far, but I don't think that stops the image from being a photograph. Any image that comes  out of a camera is a photograph, and every  photograph is a work of art, an expression of self. You just have to find the right way to express what you want that image to show.

Over the next few weeks, I am going to be doing a lot of re-editing of photos. I am trying to structure the photographs that I have taken over the last two years, and there are thousands of them to go through. I have grown in my editing, from making simple changes in Picasa to starting serious editing in Photoshop, and I am hoping that the changes in vision will come across. You can expect to see some comparisons over the next few weeks, starting with this image from my vacation in Thailand: 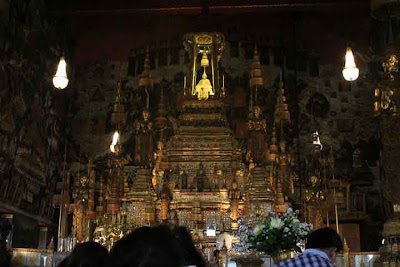 This is a temple within Wat Phrat Kao in Bangkok, Thailand. To get to this golden statue, you need to wait  patiently in the long queues and even then, you are only able to walk through the room without stopping. No flash photography is permitted, which meant that the photograph needed to be taken within a split second without stopping to position myself for the best angle and with throngs of people around me. This is the photograph out of camera, the only editing being the resizing of the image. 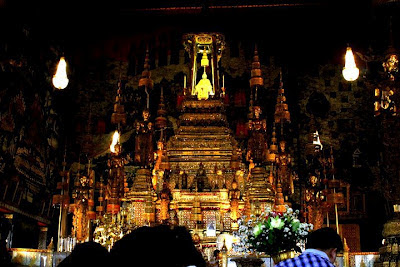 This was my first attempt at editing the image in Picasa. The aspect that I wanted to bring out was the golden statue and the platform surrounding it. I certainly managed to draw attention to the colour, but the background behind it is very much in shadow and there is still a lot of distraction at the front of the image. At the time of editing the picture, I was very against cropping images, feeling that their size should always remain relative. This is something that I have grown out of. I now realise that there is no reason for the size to be stagnant. What is more important is symmetry and removal of obstacles that draw the eye away from the subject  of your image. And so, I tried to bring this across more in my final edit.

This is my final attempt at editing to image. You will notice that a lot more detail has been brought out from the background, but there are less distractions due to the way that the image is cropped. The people in the front have been removed as has the statue to the right, to allow for symmetry as a rule of thirds would not have worked in this instance, the left hand side of the image has been cropped as well. The statue itself is placed towards the centre of the image with the head almost precisely one third of the way through. though the colour isn't as vibrant as in the initial edit, it is also not as harsh in places (like the bottom of the platform) and I feel that it makes for a much more rounded image which brings out the fascinating nature of the temple rather than just focusing on one aspect on  its own.

Watch this space for more editing advice to come while I sort through the photos from the last two years and make some adjustments as I go.
Posted by Unknown at 9:29 PM