Lightning in the Dark 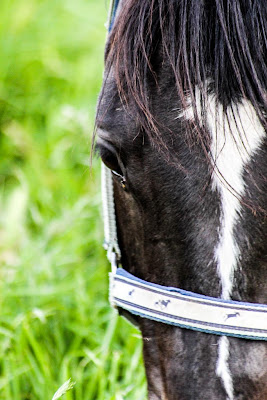 The battle was lost, but the war was far from over. I never did get over the fact that I had been denied the right of all children to learn to ride a horse. What it did mean though was that I started to hold a special place for horses in my heart, a place of awe and reverence. Horses to me were always animals to be respected and, at times, feared. Beautiful creatures that I could look at, but not touch. Until Lightning.

"Can I," I ask Kim without taking my eyes off him. His coat is gleaming in the afternoon sunlight, and all I want to do is reach out and touch it, but not knowing how he will react, I am hesitant.
"Of course!" It is as though I have asked if I can breathe. "They need all the attention they can get," Kim announces as she explains that a number of the horses at Grahamstown's paddocks have owners who are not able to come and ride them nearly as often as they would like.
"Horses are meant to be ridden," she says matter-of-factly. And I can see it in their legs, the muscles bulging, in the flow of their manes that whispers of a will to be running, to be galloping, to be free. Horses are meant to be ridden, not to be cooped up in pens out of the sunlight.
I reach out a hand slowly towards him, half expecting him to buck or to shake his head as though swatting away a pest. But instead, he continues with his meal of as much grass as he can get, and my hand runs over his velvet coat. It is as soft as it looks, softer in fact, and my fingers tingle under the touch. 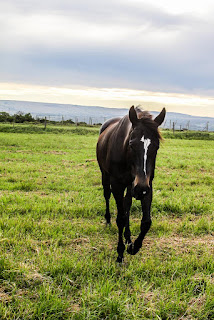 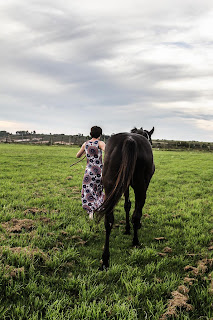 The weather is refusing to cooperate with us, the sun hiding behind clouds rather than providing the golden light that I had been hoping for. But the clouds set a peaceful mood which suits our needs as we make our way to one of the paddocks.
"Lightning," Kim warns as she sees him head straight for the grass that lines the fence. She leads him instead to the solitary tree in the middle of the field, and here he stands, awaiting instructions, for all of three seconds before making his way back over to the fence.
"He's still young," Kim offers as an explanation. Like a typical teenager, I think to myself. Learning how the world works and marvelling at its every offering.
"Maybe he will be better in the other field," I offer as a suggestion, and we take him next door where there are no trees and less long grass to offer distraction. Just emptiness, with me on the sidelines trying to capture it. 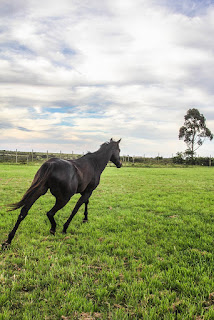 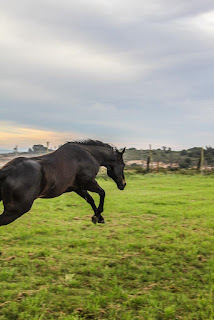 "Come on, boy," Kim announces with a clap, trying to get him to run. And run he does, straight towards me. I duck instinctively as he passes, and the camera clicks just a second too late every time, impossible to catch his full frame in a single shot as he races past like his namesake. He reaches one side of the paddock and turns to run in the opposite direction. His eyes are wild with joy and confusion at the freedom.
"He's never been told to run before," Kim explains, as her own eyes fill with concern. "He doesn't know what's happening."
As he reaches the fence, he tries to go further and finds himself blocked in at every corner, the only way out is forward and he tries his best to make his way out, running into the fence before scaring himself.
"It's okay", Kim coos, as I stare wide-eyed, not knowing how to react, not knowing what it is that I have done. Her voice calms him almost instantly, and he stops running and lets himself be comforted by her words, her soft touch.
"Good," she says, resting her head on his chest, running her hand down his back. "Is it okay if we head back now," she asks, and I nod happily, not wanting to frighten him any more than I already have. 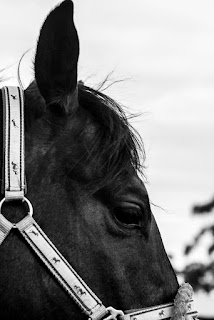 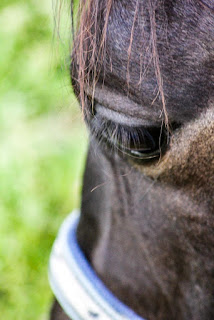 As we make our way back to the stables, Lightning returns to his normal self, stopping to eat as much grass as he can manage along the way, his stride slowing as his heart rate lowers. Kim walks him back to his stall, and it is back to the darkness, but suddenly the cool of the stall seems more inviting, the pen offering a soothing familiarity. I take one last shot, and I know that it is not going to be perfect, but I love it anyway. I have captured the Lightning in the dark, and it feels right. 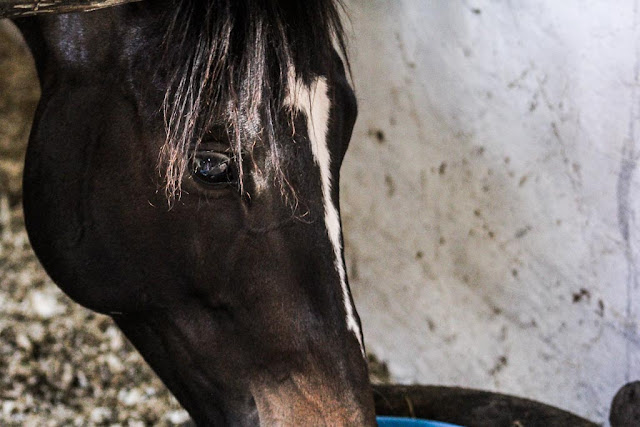