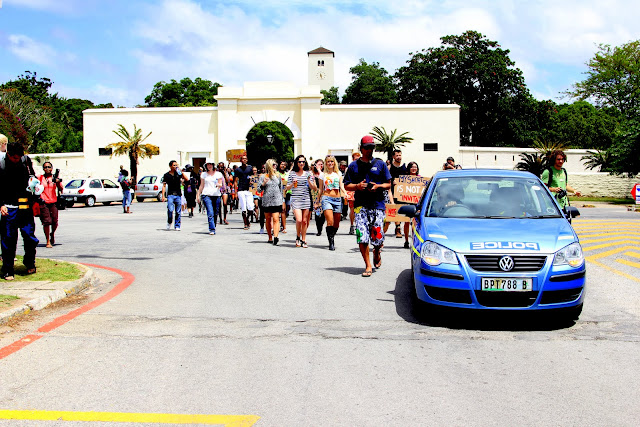 The idea of Slutwalks started in Toronto in April this year and have since spread throughout the globe. Every major city is having their own Slutwalk where women arrive dressed however they please and saying for once and all: "What I wear is no excuse to rape me." Legs, cleavage and navels abound as women dress in short skirts, skimpy tops and even, in some cases lingerie. But this is exactly the point. Dressing in what someone might think is an inappropriate manner is no excuse for rape. Using it as an excuse for rape is unacceptable and society needs to realise this.

Grahamstown's very own Slutwalk might not have had the attendance of ones in bigger cities (like Cape Town, Johannesburg, Durban as well as the international alternatives), but the spirit was certainly there. The turn-out was around 100 people all dressed to kill and shouts of "Wathint' abafazi wathint'imbokodo" (translated as You strike a woman, you strike a rock) filled the streets. Signs were passed out and pink ribbons were attached around wrists, necks and used as headbands.

Photographers may not have been the most popular people around - no one particularly wants to have photographs of themselves splattered on Facebook even at the best of times - but there were tons of them around regardless. Faces were hidden, comments of: "If this gets into the newspaper, I'm going to sue" could be heard and I snuck around in between protesters to try and get the necessary shots without being too obtrusive.

At the end of the day, Slutwalks are entirely necessary in societies where it is still acceptable for the excuse of clothing to be used as an excuse for rape. Hopefully, in the years to come, this will no longer be the case, and I am fairly sure that Slutwalks would have played a part in the revolution. At least they show that there is still hope.
Posted by Unknown at 4:41 PM