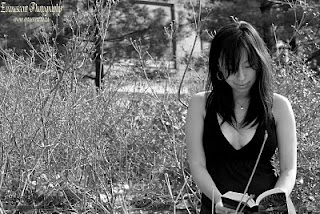 From the moment I saw the umbrella, I knew that I wanted it to be mine. The fact that it belonged to Amy Jenkins, my KBFF (or Korean Best Friend Forever for those who are not so in touch with the lingo), was the only thing that prevented me from stealing it. If it had been anyone else's it would have been gone within minutes and hours later, the owner would have been scratching their head or tearing their apartment apart in the search for it.

What made this umbrella so special (aside from belonging to Amy, of course)? I had three umbrellas already! What was it about this one that drew me in? Well the colour had something to do with it. The bright red broken by white hearts and compounded by a black stem all melded together to create the perfect combination of colours to make me want to have it. But what was even cooler was the way that it twisted open. It reminded me a little of the cocktail umbrellas that you sometimes get in drinks, and I wanted it!

What makes Amy so special that I wouldn't have taken it from her? Well, as I said earlier, she is my KBFF, and she is that for a million and one different reasons that will all probably sound really silly to anyone but the two of us. All that I know is that stealing it from her would be like stealing something from myself – hurtful, pointless and just plain silly. Instead of stealing it, I decided to capture it on film together with it's owner. 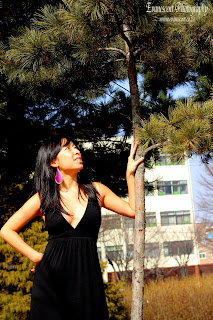 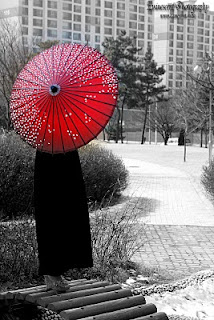 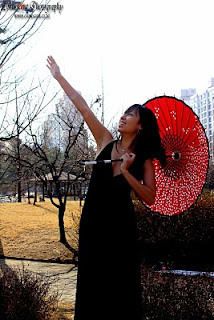 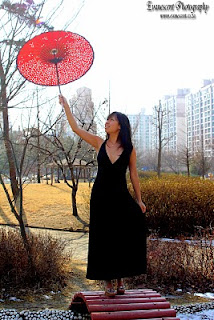 The umbrella required glamour – not just any t-shirt and jeans or sundress would have done it justice, which Amy well understood. She returned from Australia prepared and triumphant, bearing a gorgeous and, we discovered, rather revealing (for Korea at least) dress. It was perfect! The black contrasted wonderfully with the red and we just happened to do the shoot on a day when the sun was shining brightly and it was possible to wear a sleeveless summer dress without catching frostbite. 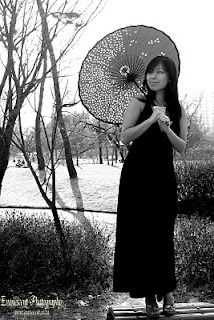 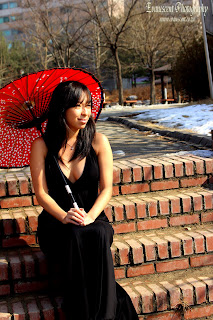 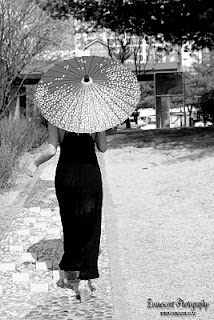 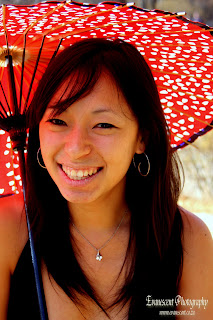 We started in the park where Amy made friends with some of the trees and rocks, posing away for me and my camera. Soon it was time for the umbrella to make its much anticipated appearance, and I captured shots of Amy walking along bridges, sitting on rocks, posing as Mary Poppins and just plain having fun – you could tell by the wide smile on her face and the non-stop laughter that was emanating from our direction causing the local ajummas and ajoshis to be rather alarmed. When our imagination had run dry, Amy took out a book and started posing with that instead until she spied one of her students and we decided that enough photos had been taken in the park. Instead we walked down to the river, which wasn't nearly as beautiful as it had been just a few days before when it had been frozen over, and took a few shots there before going home. 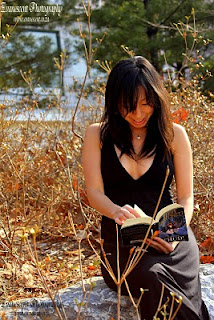 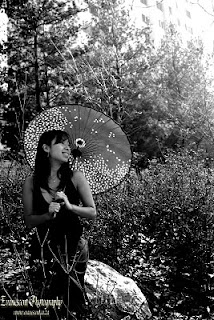 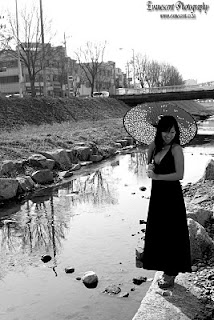 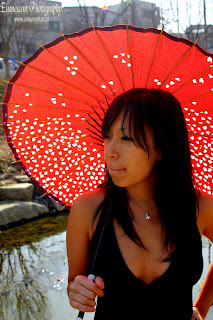 Because the river wasn't quite the way we had expected it to be, our second shoot (which would have had a winter theme) was put on hold, and we are currently trying to think up a second shoot that we can do before I leave on Friday evening. So check back here soon for more photos of Amy.