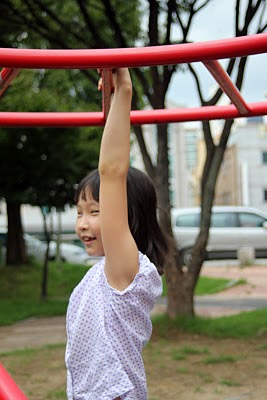 I was walking along taking photos in the park today when two girls appeared and, giggling frantically, introduced themselves to me. I was more than happy to oblige as they tested their Hello-Howareyou-Nicetomeetyou English skills on me (I am exaggerating actually - their English was surprisingly good at first, and then I became less surprised as I learned that they were my friend Geraldine's students) , and it turned out that they were more than happy to oblige as I asked to take photos of them. This is an area that I am not familiar with - taking photos of strangers. It would be fine if I didn't have to ask, but I know that I should ask, and I tend to get embarrassed very quickly when I do. In any case, I managed to pluck up some courage today and just ask to take their photos, and it worked in my favour. Today's photo is of one of these girls playing on the monkey-bars, taken at 1/100 shutter speed with a 5.0 aperture and an ISO of 160.
Posted by Unknown at 11:42 AM