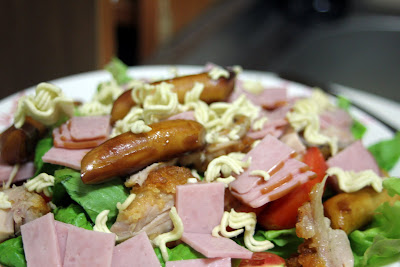 I was sitting at work this afternoon just before hometime and was contemplating what on earth I was going to do for dinner when Grant suggested a salad. Although I shrugged the suggestion off at first, it stuck with me and I decided that it wasn't such a bad plan after all. And so I made my way to the store and started chucking things into a basket. Anything that I could picture in a salad was bought until I had a ginormous, ridiculous salad planned out in my head of lettuce, tomato, chicken, ham, tteok (rice cakes) in soy sauce and dried noodles (think the two-minute variety). I came home and carefully put the meal together, and today's picture is of the resulting monstrosity, which actually didn't taste too bad once the tomatoes were removed (why I bothered with tomatoes when I hate them I will never know, but I thought they would go nicely. They didn't.)

Email ThisBlogThis!Share to TwitterShare to FacebookShare to Pinterest
Labels: Food