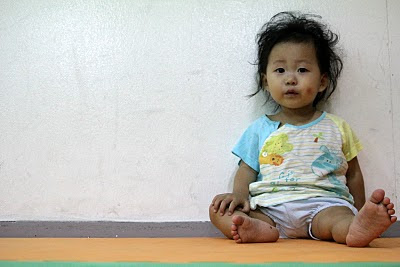 Jess and I arrived at Taekwondo today to find the place completely empty and the office locked. We decided to wait around for a bit and sure enough, after a couple of minutes two of the other girls arrived. Shortly after they came upstairs, a Korean woman arrived bearing six pizzas and numerous cokes and carrying two girls by the hand - a six year old and a fourteen month old. While the six year old whizzed around the room at high speeds, the fourteen month old stayed in the corner looking completely confounded at being surrounded by so many foreigners. I took out my camera, and the mother insisted that I get some shots of her baby. This was one of my favourite ones from the night and I think it turned out rather well. This photo was taken at a shutter speed of 1/50, with a 5.0 aperture and a 1600 ISO.

UPDATE: Edited by auto-contrast at someone's suggestion.
Posted by Unknown at 5:03 PM