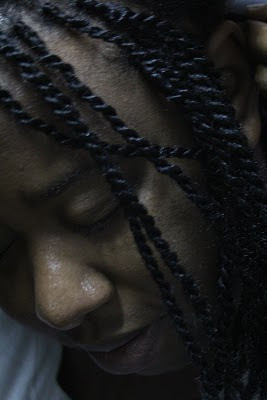 Yesterday I went to Seoul with Shaina to get her hair done. If you have ever seen or experienced a braiding or twisting session, you will know just what an ordeal that is. It took two people about five hours to get the job done in a small, badly lit room with six little children running in the background and occasionally popping in to see what was going on. At the end of it, it was all worth it though. The picture is not quite of the end result, since it was curled after the photo was taken, but it is beautiful none-the-less. My only disappointment is that the ISO had to be so high because of the terrible lighting. In any case, the photo was taken at 1/25 shutter speed with a 5.6 aperture and a 3200 ISO.
Posted by Unknown at 4:11 AM