It has almost been a full week since I started taking these pictures, and it hasn't been an easy one. I have already found myself pondering indoor photos and not wanting to venture outside. I blame the rain and my incessant sickness that has started once again. But despite that, I have managed to venture out every night thus far and have not yet resorted to pictures of my apartment. 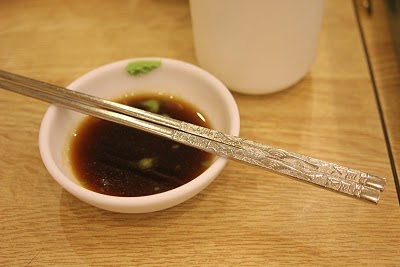 Tonight I went out for a late dinner with David, Jenna, Gary, Amanda, Blake, Rebekah and Robyn in celebration of Blake's birthday. We had some Shabu Shabu, one of my favourites, and it was delicious (though not as good as the restaurant that my co-teacher takes me to.) This photo was taken shortly into the meal, prompted by Blake's admiring the chopsticks. As he was the birthday boy, I obliged and the pic actually ended up coming out really nicely. So here it is! Taken at 1/100 shutter speed with an aperture of 3.5 and an ISO of 1600. Hope you like it!
Posted by Unknown at 4:09 PM